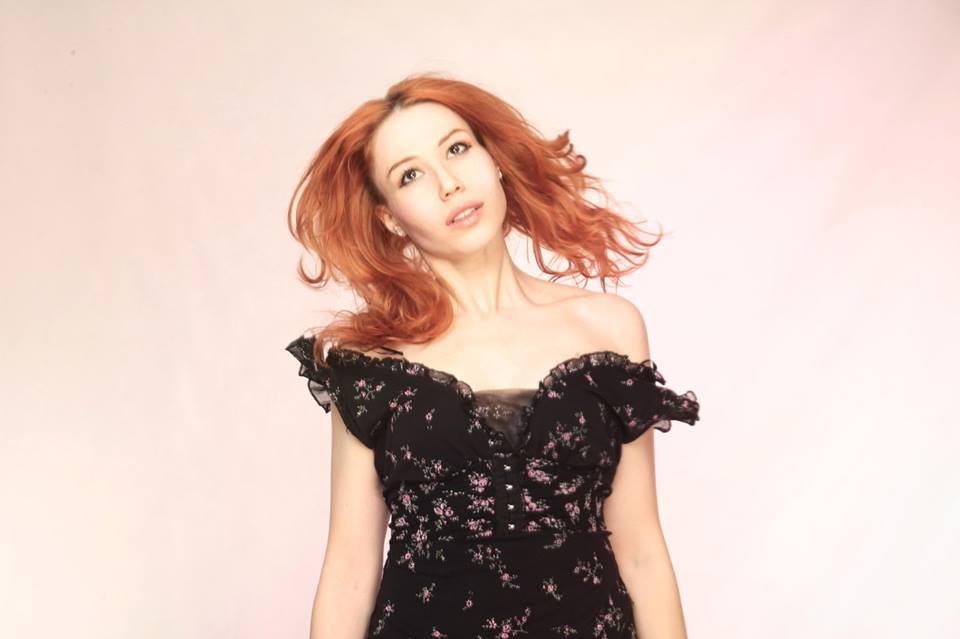 Polina Ivanovna Mazaeva and I met on Facebook, which is kind of banal. She looked in her photos like a red-headed version of my very first love Gabby, and so we took for about a year to casual banter and not so causal dream planning. Lots of co-psyche-social support. A lot of sharing of writing through google translate, I’m not even sure she spoke English very well when the writing first began sometime in late 2016. I was probably not her only mail order boyfriend, but I planned to be an exceptional one.

Reads Polina Mazaeva:
! It is only “google translator” translation! We can it make much better! It is based on real events that have not yet occurred. I am like a precognitive person I think sometimes, I know you will understand. I miss you and the weather is still cold. Yazan is afflicted with attention deficit disorder and I’m struggling to keep him in school. Kisses.

Grandmother always said that human history is built on legends. Legends can turn human consciousness. They are building a world system. And every person, regardless of fame and origin, also has a legend. Sometimes it grows and becomes so huge that it transcends one person, grows and becomes public. If you do not believe me, tell me, how much do John Lennon’s panties cost? More Rubles than you even know!

I was much more fortunate than the famous musician. Because if you hold this diary in your hands, then we are still in the same reality. Before you start reading, I should warn you. Some things that I wrote half a lifetime ago, cause a rush of blood even to my transparent cheeks. Now I have changed beyond recognition, and I am ashamed of many thoughts of the past. But I cannot hide them, since I think and act differently half a lifetime ago, I would never be the same as now. I changed some lines and edited them so that the reader was comfortable navigating in time. As much as it is possible in the circumstances of this story.

The outgoing day unswervingly followed its manner of spoiling the mood of people. It would seem that it’s much worse: the school year barely had time to start, as you were overwhelmed with a ton of homework and extra-curricular duties. Do this, learn it, take part in the contest for the best beaver from the dried stems of bamboo, show others an example and draw a portrait of your best friend. Especially when you consider that my friends at my school did not start, not counting Anki the dog-owner. That is, the “doggirl” she was nicknamed for a special love with dogs, and with people she has about the same as me. No wonder: no one loves children from large and poor families, who only dreamed of smartphones and who does not shine to dress, like the girls on the pictures in Togmler.

And the “Capsule of Time” on the nose. Such an event, when they gather all the best students from different schools and force them to write touching letters to their descendants, and then put the whole thing in one big urn and dig in for many years. Then somebody (at best) extracts “letters of happiness” to the light and solemnly reads to the disciples of the future. In the worst case – just lets in the expense of a school subbotnik. To kindle fires, or you yourself understand in what capacity.

To my regret, I turned out to be one of those “lucky ones” who had the honor to put aside the maggot for these shoots from a bright future. And today there was to be a photo shoot about this. They told everyone to look better than they really are. And you understand what a 15-year-old girl can come up with about this, who has neither work nor well-off parents. That’s right – nothing good.

For this reason, yesterday I again had to spend my lunch money for a conversation with Mr. Comrade Marmalade. So it’s called on the Internet, but in the life of this guy I have not met. All that is known about him is that he is about the same age as me. And that he is studying in some particularly cool school, just does not say exactly where. I do not know the real name either. And I understand how stupid this will sound, but … I can say with full confidence that this person can be considered my only friend. Without him, I would have completely gone mad, there is so much injustice in my life, and only he is the only one I can tell about everything. I do not have a smartphone, just a button phone. But, fortunately, in our remote places there were still Internet clubs, not yet rebuilt into some other laser tag. People have not forgotten how cool is sometimes a personal presence, even if you are fighting over the net. And this fact gives me a chance for moral support of the only person in this world who understands me.

Mr. Comrade Marmalade is a character I created after you because you (Sebastian) are both cool and smooth like a cool Mr. Butter. I honor you as writer this way my love.

As usual, after talking with Mr. Comrade Marmalade, I calmed down a bit. Decided to follow his advice and talk with his mother, with whom my relationship is not glued. It’s useless to talk to my father, and he was not my father at all-when I was eight years old my mother met this ram and, to brighten up her loneliness, married him. After the first spit in my soul happened the second: the mother gave birth to Seryozha. This small squeaking lump of evil grew wider day by day, as if even his physical shell was filled with a sense of self-importance. Now he is three years old and looks like Homer Simpson from the cartoon. The same bald and fat, and just as little understands what they want from him. But his mother simply adores him and devotes all his time to him. The stepfather devotes his time to work as a loader and his school friends, with whom he successfully divides his love for a bottle every day for almost six months. A neighbor on the landing says that soon it will all end badly for him and he will be fired, but at work, only Tajik guest workers will be left as porters, because they are always sober. But none of our family seems to care about that, and her mother likes to turn away from unpleasant subjects, and when her stepfather returns home, she simply goes into the bedroom and puts Seryozha. The stepfather remains in the kitchen, eats his dinner, smokes and after a while breaks into my room, where I try to do my homework. He sits on a chair and asks me to turn to him and listen to what an adult, intelligent person will say to me. I break away from the lessons and try to pretend that I’m very interested. Because if you try to agree to him, after half an hour he, satisfied, is expelled from the room and goes to the bedroom, where the mother already pretends to be asleep. There he falls to his part of the bed and is forgotten by a sound sleep until the morning. At six the alarm goes off and he again goes to work as a loader. And as soon as the door closes behind him and the key turns in the lock, each of the remaining houses exhales quietly and begins to gather for their business.

I dress my rejuvenation from my neighbor’s shoulder, because I have nothing more to wear. I’m having breakfast with what’s left from yesterday, picking up my backpack and going to school. The mother rises, reluctantly takes a shower (because after a night in the stepfather’s stepfather’s room without this in any way) and goes to prepare food for her beloved Seryozhenka. Sometimes she pretends not to notice me, and then suddenly takes offense at the fact that I did not tell her “Good Morning” first. On this we diverge, and I remember my mother again when I hear the whistling of a teapot from a window on the way to school.

Yesterday I broke the tradition of almost not talking to my mother and asked her to buy me a mascara and a dress to look decent on the photo, which will go to the city’s educational news blog. But the mother pretended not to hear me. I repeated my question, but she just turned away and rather grumbled “leave me alone.” And then she simply retired to the bedroom, to her Seryozhenka.

Having lost all hope of transformation, I locked myself in a bathtub. From the mirror, I saw an ugly face: narrow brown eyes. Liquid light brown hair to the shoulders. The red tubercle above the lip is the first signs of herpes that grows in all directions, just the day before the photo session. And now the eyelids are still swollen from tears of resentment. Cool.

I had five minutes to make a decision. Now I admit that I did a pretty bad thing: but what was left for me under the current conditions? I waited until my mother drove Seryozha for a walk. She did it quite detached, without even calling me to help her pull out the stroller. Probably was too angry with me, but I was just glad about it.

From my hiding place I heard the wheelchair rattling its spokes on wheels, rolled out onto the landing. As the elevator rose and opened, letting my mother and Seryozhenka in, how his doors slammed shut and the booth went down. As soon as everything was quiet, I left the bathroom and made my way into my parents’ bedroom. There they have a closet in which the mother hides usually all the valuable things and things that should not be caught by the eyes of me personally. She does not know that I’ve already found many interesting things there…

I crept in there and found a cosmetic bag, in which the mother keeps her little secrets, which should help her to keep my stepfather’s interest. For example, a tube of cheap hand cream. Or here, colorless lipstick (mother almost does not make up). And the only toilet water, to which “daddy” was ruined on the day of her birth (she herself was to blame, it was necessary to choose someone richer, not this drunkard). Somewhere on the very bottom of the cosmetic bag there should be an old-old mascara that needs to be rubbed with a brush, like shadows. If this compound is applied to the eyelashes, then there will be nothing like this ink.

Finally, I groped for the right box and, squeezing it, I took my hand out into the light. But rummaging through the cursed cupboard, I did not hear the front door open. And as soon as I returned the cosmetic bag to the place and tightened the closet doors, I was waiting for a surprise.

Silent scene – my alcohol-stained “daddy”, barely standing on his feet, swaying in the doorway, trying to realize the full extent of my impudence. After all, as luck would have it, the bedroom is just opposite the front door. And who knew that today his patience will burst with patience, to whom the labor of Tajik migrant workers really turned out to be both cheaper and sober.

And then it was like in a bad movie. That is, as in a movie with a bad ending, and not some foreign comedy, where everything always ends well! Like our love for each other. Please don’t die in this war Sebastian Adonaev.

May 20, 2018 by Walt Adler Categories: Uncategorized Leave a comment