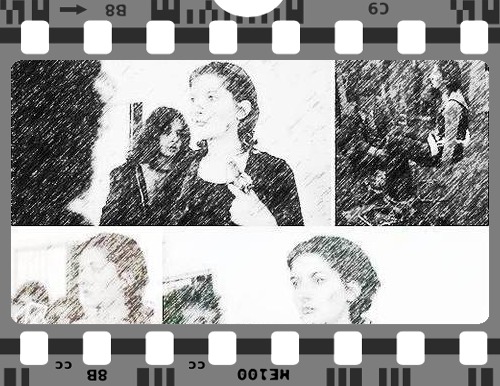 Back on the monstrous underwater vessel called “the Black Mermaid”; traveling propelled by a Thorium reactor towards the United States; the extraction squad sits for black bread, herring, tea and Compot, sweet berry punch.

The Chinese had finished a canal across Socialist Nicaragua that was three times the size of the US controlled one in Panama.

But, for some reason no one in the USA even knew the thing was operational. And it was through this cognitively non-existent mega water way the Black Mermaid nuclear submarine was planning to pass on its run into American waters.

McIntosh is a very big guy. And so is Oleg Medved, but they are big in different ways. McIntosh is Trinidadian, dark as night. Black even for the eyes of white men that turn many shades into enemy other. He stands over six feet tall. He is by far the most conspicuous person in the unit that was being briefed one hour before deployment in a hermitically sealed fast boat unto the shores of the United States of America; a border run to a rebel base on Block Island.

McIntosh is muscular and very well trained in the arts of Voudoun. While his size stands out and his willingness to break the backs of any person who might lay their hands on the candidate he has taken a blood oath to protect; his main task one mission will be to allow Ms. Adelina to enter the dreams of Sebastian Adon, and keep him from unleashing his fighters in ways that might trigger a bloody, bloody bloodbath. In fact, their unit, now in massive black nuclear submarine owned by the State of Israel is hurtling toward the international maritime border.

Oleg Medved will be quick to tell you that “Oleg the Bear” is certainly not the nice Ukrainian Jewish name his mother gave him. But, it will be his name for now.

He is very likable. Gregarious in the right word! He goes nowhere without a camera and takes a lot of pictures some arty, some naughty, some of assets to note all of them quite professional. He even as Ms. Adelina giggling on the first time they met; which was a few weeks ago in Sakhalin, that cold vile place.

Oleg is the communications man for their little squad. It is his responsibility to work with his very stunning partner Ms. Yulia Romanova, to whom he sometimes called “his muse”, but alongside being a slender and sensuous brundinite she was very good at building bombs and also social engineering.

If it was the duty of Adelina Blazhennaya to enter the mind of Sebastian Adon and take control of the resistance apparatus working towards a vast national uprising set for an upcoming hidden date; no longer hidden to the N.S.A. and Department of Homeland Security; and it was the duty of McIntosh to use his spiritual training to help her enter that glorious rebel of mind of Adon’s; then it was Oleg Medved’s job to teach the resistance how to use the advanced communications and IT tools developed in the Sharashka in Seattle, Washington. This particular “Bureau of Experimental Design” was Chinese funded as said but really was bringing together some of the best offerings in the Iranian library vaults and cross collaborating with Cubans and Israelis. These were upside down cake times. And it was Yuliana job to seduce everyone they came in contact with and use her very specific charms to extract data needed. And Adelina being a powerful sorcerous shaman and considered a candidate since birth was to lead quietly the unit and ensure the outcome of prophesy foretold in a little book called the “New Social Gospel” revealed by some magnimonious higher power to Emma Solomon.

What politicians said on the international circus stage were hardly what their populations connected via the inter-web were ready to agree to, not a single year longer.

December 21st, 2012 was to be the year according to the Mayan calendar that a great shift would occur in Humanity. Well that was not the date of the uprising. But those great spiritual cosmic forces were being factored in.

Before they departed to run the border via Black Freighter submersible they rendezvoused a week prior below the desolate Eastern coast of Russia’s Stanovoy Mountain range; on the island of Sakhalin.

They were all meeting for nearly the first time so to break the ice over vodka, Oleg the Bear got them playing a famous game of gradual interrogation called “Three Thing to Know about me.”

“Let me tell you three some things about me,” Oleg said to them back in Sakhalin, them being McIntosh, Adelina and Yuliana Romanova.  They were drinking vodka and eating black bread with herring, and salted tomatoes, goose patsy and strange orange vegetable that only grows below the soil of Russia.

“I am not a creature that will live vicariously!” he declared in English out of respect for McIntosh who spoke no Russian.

“I am not a believer like you three in some vast forces that I cannot measure hold and see. I am not here there therefore as a fact of faith in Comrade Solomon; I am here because I have money and orders and a contract to be here. And that is simple enough.”

“I was told to come and get these Americans a means to tell their story. The story of their uprising most precisely. I was told to set up these communication lines so Americans can join the global revolution underway for over two hundred years.”

“I am here too to enjoy myself and take pictures!” he declares.

“I’m coming as a highly paid tourist. I will take a million pictures; I will leave behind more than I take away,” and this was the conclusion of Oleg Medved’s little speech back in the Sakhalin Outpost.

“Have you any faith in the prophesy?” Yulia asked him. Yulia was every bit as beautiful physically as any woman Oleg had ever known, but Oleg had come to see women as accessories for men, adjuncts and muses for the doing of big things or even just fun sweaty things. And what he noticed since the Romanoff Bratva took over his contract was that he had more time to pursue his art. Money absolutely brought options.

He had a morally ambiguous relationship with Yulia founded on the principle that her partner back in Russia was not her boyfriend or her husband. These were times of fun and games with papers and loyalties.

They took a lot of pictures together; he of her and she and he from his hip. His burly part beard and broad shoulders were quite the opposite of her elegant spindle form, her black brown hair falling back and forth over shoulders as she let him capture her.

“No faith at all in anything, or anyone, certainly not the Americans,” he declared.

While beauty was not a question her eyes lacked what the parapsychologist called the “Old Soul depth” of Comrade Blazhennaya.

“And you little Mosquito,” exclaimed Yulia referring to the American translation of Blazhennaya’s fictionous name, “Do you believe?”

The Israeli handlers had put them up in windswept bunker safe house in Yuzhno-Sakhalinsk waiting for the black freighter sub to arrive. The streets were empty because of the snow. Yulia and Oleg were flown in from Yekaterinburg by the Romanoff Bratva that held their contracts. Oil and Gas oligarchs. McIntosh and Adelina arrived together from Seattle.

In the cultural context of both Russia and Trinidad it was necessary to drink a lot of toasts and shots in celebration to possible; the hopeful success of their mission. And secure potentially physical privileges to be allowed of their either female leadership!

And before Adelina could answer Yulia Romanova’s inquiry, her face grinned with a hard and quiet smile now into the thirteenth shot of Russian Standard Vodka.

Her eyes began glowing a brown into turquoise, Yulia jumped in her seat, then Adelina’s eyes went grey on grey and McIntosh arched his back contorting into a Bhutto type posture, spasmodically twitching! Grinning obscenely. Oleg lurched out of his seat but then by the force of her mind and found himself saluting her.

And then Emma Solomon in husky voice of a warrior woman spoke out the mouths of Adelina and McIntosh perfectly synchronized, and that was when Yulia and Oleg realized that neither the Romanoff Bratva nor the Israelis were in charge of this ‘job’ at all.

The pair exclaimed in the voice of Solomon, “by the time we are done here there will be no more safety for the men in high towers perched atop the mountain of any faction. You were all born serfs or various types of half casted slave, but your unborn children have been assured their emancipation via deeds to come.”

Everyone dropped back into their seats. Oleg grinned. McIntosh smiled. Yulia looked truly scared, emotions breaking through her control of countenance. And Adelina Blazhennaya in all her petit and unassuming compact grace then uttered, “Trust that among the Americans are many who have cried out over what happened in the killing fields and sprawling slum cities. They have more going on than dancing, fornicating and erection of taller towers and bigger, brighter stadiums.”